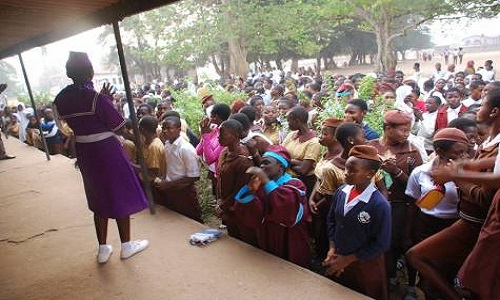 The Force Headquarters has denied placing a ban on assembly devotion in schools and other public places nationwide.

The police said rumours of the ban were untrue as it only issued advisory notices to states predominantly affected by the Boko Haram insurgency.

A statement by the Force Public Relations Officer, Ag. ACP Olabisi Kolawole, read: The Inspector-General of Police, IGP Solomon E. Arase, fdc, NPM, wishes to inform the general public that the Force has not issued any order banning assembly devotion in primary and secondary schools anywhere in Nigeria.

The IGP notes that against the backdrop of current security challenges in the country, the Police only issued advisory notice directed predominantly to the states where there are insurgency, enjoining them to apply caution in the said assembly so that such congregations do not present soft target for insurgents.

Reminding citizens of their freedom to worship as enshrined in the Constitution of the Federal Republic of Nigeria, the Police High Command states that the Nigeria Police Force did not stop anybody from taking part in prayer sessions organised by schools, churches and mosques, describing the congregation as the constitutional and democratic rights of Nigerians.

The IGP calls on the general public to see the present position of the Force as a necessary sacrifice for the security, safety and peace our schools need, as security is a collective responsibility.

Meanwhile, the Inspector-General of Police, therefore, reassures Nigerians of the Police’s determination to strengthening and enhancing the safety and security of all residents of Nigeria while counting on Nigerians to continue to support and work in synergy with the Nigeria Police Force toward the achievement of its constitutional mandate.