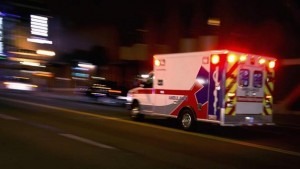 A family is grieving after a teenager was killed while trying to get some laughs in Georgia. The parents of Alex Desalis, 16, say he was twerking on the hood of a Jeep when he slipped and became pinned under the vehicle, WXIA-TV reports.  “It wasn’t a car surfing adventure,” Desalis’ father, Kenneth Guthrie told WXIA-TV. “It was him climbing up on his friend’s [vehicle]-the hood of the car, on all fours, more than likely being funny, trying to get a laugh by twerking.”

The driver of the Jeep, a female friend of Desalis, has yet to be charged but the teen’s parents say they hope she will escape punishment.  “I don’t want probation. I don’t want her in jail,” Michelle Guthrie says. “It was an accident. We feel more bad for the family — for what they’re going through as well.”  State troopers say the teens were on the side of the road when they went for a ride up the road. That is when Desalis reportedly jumped onto the hood of the Jeep.

“He was on his knees and hands on the center of the hood,” Trooper John Daniel told WSB-TV. “Maybe he lost his footing and began to slide off the vehicle, striking the ground and then going under the Jeep.”
The boy was airlifted to Grady Memorial Hospital. He died from his injuries the next day.