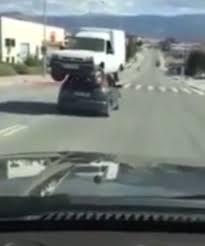 Two Spanish men are facing a fine for a stunt involving driving a green Ford Focus with a large white van stacked on top of it.

The viral video shows another driver pulling up alongside the dangerous moving car pile in disbelief.

The drivers face a fine of approximately $536 US dollars for dangerous driving.

The Local reports that the men have since been apprehended and are set to appear in court in Segovia.