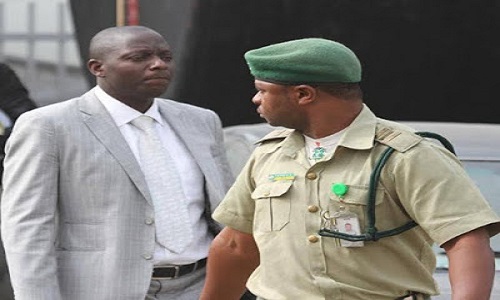 Justice Ibrahim Buba of a Federal High Court, Lagos, on Monday fixed Jan. 18, 2016 for the trial of former boss of the Nigerian Maritime Administration and Safety Agency (NIMASA), Patrick Akpobolokemi and five others, charged with N2.6 billion theft.

The accused were charged by the Economic and Financial Crimes Commission (EFCC).

They were first arraigned before Justice Saliu Saidu of the same court, on Dec. 3, on a 30-count charge bordering on conversion and stealing.

They were again arraigned before Justice Ibrahim Buba on Dec. 4 on a fresh 22-count charge, also bordering on conversion and theft.

They had all pleaded not guilty to the charge and justice Buba had granted them bail in the sum of N50 million each, with two sureties each in like sum.

The court had also ordered the accused to sign an undertaking not to unnecessarily delay speedy trial.

Buba had then adjourned the case for trial.

When the case was called on Monday, counsel to the third, fifth, and sixth accused, Mr Seni Adio, informed the court that he required some time to prepare for trial, having been briefed.

He, therefore, prayed the court for time to peruse the documents and prepare for trial.

The prayer for adjournment was also adopted by counsel to the other accused.

Consequently, Buba adjourned the case till Jan. 18 for trial.

In the charge sheet jointly signed by Mr. Festus Keyamo and Mr Rotimi Iseoluwa, the accused were said to have committed the alleged offences between December 2013 and March 2014.

The prosecution alleged that in February 2014 in Lagos, the accused persons conspired to convert about N437 million belonging to NIMASA.

They were said to have on January 9, 2014 converted to their private use, about N66 million, and between April and August 2014, converted the sums of N21 million and N53 million respectively, also to their use.

The total sum of money allegedly converted by the accused was said to have amounted to about N2.6 billion.