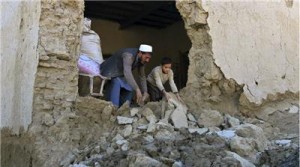 A 6.2-magnitude earthquake has struck northeast Afghanistan near the country’s borders with Pakistan and Tajikistan, according to the US Geological Survey (USGS), with tremors being felt as far as New Delhi. The USGS said Saturday morning’s earthquake, initially reported as magnitude 6.4, was at a depth of 203km and centred 82km southeast of the town of Feyzabad, capital of the Afghan province of Badakhshan.

Kabul residents rushed out of their homes and buildings on what was a bitterly cold night amid fears of aftershocks, according to a local journalist, while the quake also caused buildings to sway in the Pakistani capital Islamabad.

Tremors were reported from Chandigarh, Srinagar, Jaipur, Delhi and the National Capital Region in India. In Pakistan, the Khyber Pakhtunkhwa government issued a red alert soon after the earthquake but there was no immediate information about loss of life or damage to property.