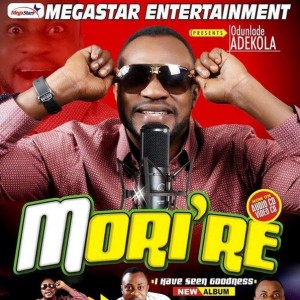 Famous for his many roles in Yoruba movies, the actor seems to be testing new waters.

Odunlade Adekola is ready to drop his musical debut album.

The title of the album is ‘Mori’re’, and it contains all the movie soundtracks he has sung so far in his film career.

“MORI’RE nitemi ooo ..all my movies soundtracks coming out this year. Yes ooo… I #odunladeomoadekola# have seen goodness now and forever in the might name of GOD” he wrote as she shared the cover of the album.

The cover of the album features the picture of his new baby boy.

Ruth Adekola, Odunlade’s wife gave birth to the boy on Monday, November 23, 2015 in the city of Abeokuta, Ogun State.

The name of his new son is Adedore.