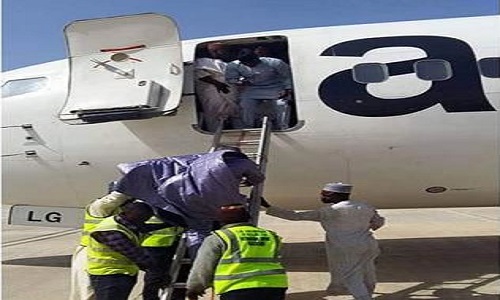 “In a letter conveying the sanction, the Director General of the Regulatory Authority, Capt. Muhtar Usman, said the action of Aero Contractors Airline in allowing the use of a ladder to disembark passengers from a Boeing 737 – 500 aircraft in a non-emergency situation is contrary to its approved aircraft handling manual.

“Therefore this is a violation of Part 9.2.4.2(b) of Nig.CARs which in part attracts a civil penalty. All relevant agencies made useful submissions during the course of the investigation.”

“In view of the safety implications of your action you are hereby sanctioned in accordance with the provisions of Part 20.2.3(15) of the Nig.CARs.

“Although the incident did not result in any mishap, the aircraft is airworthy and the Crew well qualified to operate the flight. However, it is viewed as a breach and resultantly a fine running into millions of naira have been clamped on the airline to serve as deterrence and to forestall any similar infraction by any other airline operator.

“In addition, the Captain of the flight was similarly fined for failing to comply with the provisions contained in the aircraft manual.

“The Nigerian Civil Aviation Authority,NCAA, therefore wishes to reiterate its earlier warning that all airlines should endeavour to adhere strictly to Civil Aviation Regulations,” the DG’s letter read.