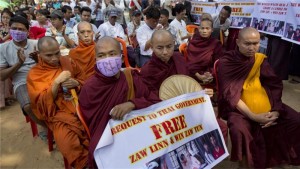 Hundreds of people in Myanmar protested for a fifth day against death sentences handed down in Thailand to two Myanmar men – seen by many as scapegoats – convicted of killing two British backpackers. A Thai court last week sentenced Win Zaw Htun and Zaw Lin to death for the murders of David Miller, 24, and Hannah Witheridge, 23, whose bludgeoned bodies were found on the Thai island of Koh Tao in September 2014. Aljazeera has more:

Witheridge had also been raped.  Both men say they are innocent and that police tortured them to force them to confess. Protests have also been staged at border crossings, and last weekend Myanmar’s powerful and influential army chief called for the case to be reviewed. The sentiment was echoed on the streets of Yangon on Tuesday.

“We do not believe justice was served by the Thai court. We are asking them to review the case,” said Nay Myo Wai, a politician who supports the Buddhist nationalist group Ma Ba Tha, which led the protest. The Thai Embassy in Myanmar said its consular section will be closed for the entire week because of the “unexpected and prolonged demonstrations” that make it hard to access the entrance. “We intend to fight for justice for the two Myanmar men in Thailand,” said U Pamaukka, a senior monk and Ma Ba Tha member.

Protesters say the two men did not deserve the death sentence in a case that has raised many unanswered questions about police conduct. The killings have sullied Thailand’s reputation as a tourist haven and raised questions over its justice system after the defence accused police of bungling their investigation and using the men as scapegoats – a charge Thai authorities deny.