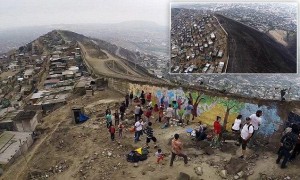 Everyone talks about the gap between the rich and the poor, but nowhere is this barrier more clear than Lima Peru, where a 10-kilometer concrete wall topped with barbed wire separates one of the cities richest communities from one of the poorest.

Located on the outskirts of Lima, the Wall of Shame’, also nicknamed ‘Peru’s Berlin Wall’, was erected to provide protection to the wealthy by preventing the poor from entering their neighborhood to commit crimes. It is so long that it can actually be plotted as a line on a satellite view of the area. The line separates Las Casuarinas, home to some of the nation’s richest citizens, from the suburb of Vista Hermosa, where the vast majority lives in poverty, without even the most basic amenities.  “The wooden houses illuminated by candles and the broken roofs are contrasted by multi-million pound houses within a few kilometers,” a local media news station recently described the situation.

As you can imagine, many Peruvians aren’t happy about the wall and what it stands for. They have condemned it as a disgrace and campaigners have posted videos and pictures online to shame those who came up or supported the idea.  However, to the people of Las Casuarinas, the Wall of Shame is a necessity, a means to protect themselves against crime. Renzo Alberti, a resident of the rich neighborhood, said he doesn’t find the dividing stricture discriminatory. “There are walls all around the city, it is not discriminatory when we divide next-door neighbors,” he told Al Jazeera. “However, on the other side it is considered discriminatory because it divides us from poor people”.

Lima’s Wall of Shame gained international attention recently, after photos and aerial footage of it went viral online. Three initiatives ‘Muralist Brigade’, ‘Open Space’ and ‘Hunger’ joined forces over the weekend to help locals from Vista Hermosa paint murals on the wall, in an effort to raise awareness to the wall.