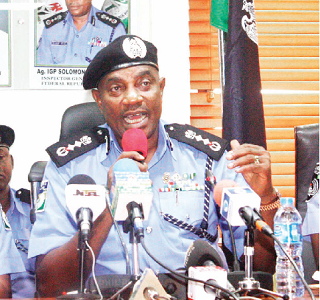 Six policemen dismissed from the Ondo State Police Command over alleged extortion have appealed to the Inspector-General of Police (I-G), Mr Solomon Arase, to reinstate them, claiming that they were framed.

Speaking with the News Agency of Nigeria (NAN) in Lagos on Saturday on their trial before dismissal, the team leader, Insp. Ogunborode Oluremi, claimed they were innocent and urged Arase to take a second look at their case.

Narrating the circumstances of the case, Ogunborode said the team was on bank patrol in the Akure metropolis, when they were summoned to appear before the Ondo Command’s Police Provost for allegedly extorting money from one Mohammed Isah.

“As I speak with you, the person in question and my team have never met face to face. We are shocked that we were dismissed for doing nothing. We were dismissed on July 4 and detained for four months in the cell.

“We were dismissed after two days of Orderly Room Trial. The Commissioner of Police, then in Ondo State, CP Isaac Eke, approved the dismissal of five of my colleagues, while AIG Helen Adeyemi of Zone 11 approved my dismissal as an Inspector”, he said.

The Inspector said the team was attached to the Area Command, Akure, when the incident happened on July 3, 2015.

He added that time had proved their innocence, as the fellow who made the complaint against them was later arrested in Lagos over a similar incident.

Ogunborode said he was unhappy with the way the matter was handled by officers of the Ondo Command, including DC Isola Dambaruba, who was in charge of Operations, Alhassan Mamuda, DC Administration and Anthony Omeh, a CSP.

He claimed that the above-mentioned senior officers never believed in the team, even when it was clear then that the complainant was lying.

The Lagos Commissioner of Police, Mr Fatai Owoseni, confirmed the arrest of the complainant in Lagos for attempting to implicate some policemen in Lagos, just as he had done in Akure.

Owoseni said intelligence reports had showed that the man was a fraudster.

He said Mohammed Isah was specialised in lying against policemen, with a view to defrauding the Force.

The commissioner stressed that the suspect was arrested after lying against some policemen in Lagos, claiming that the officers collected N188, 200 from him.

“The team was invited and interrogated and it was discovered that the suspect never had any contact with them.

“Investigations revealed that the suspect had made similar allegations previously against some policemen in Anambra, Ondo and four other state commands.

“All he does is to copy the registration numbers on police patrol vehicles and then he goes to the headquarters to complain that the officers using that particular vehicle had extorted him.

“Many police officers have been punished, six were dismissed in the Ondo State Command with his false allegations. The suspect has confessed to the crime and exonerated the officers who have been so punished or dismissed”, Owoseni said.

The commissioner, however, assured that he would take up the case of the dismissed officers in the Ondo State Command with the appropriate authority. (NAN)