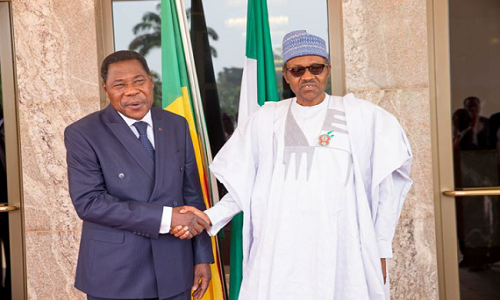 He made the disclosure after a closed-door bilateral meeting with President Muhammadu Buhari at the Presidential Villa, Abuja, during his one-day state visit to Nigeria.

Speaking to State House correspondents through an interpreter, the Beninese president said the troops were awaiting their deployment.

President Yayi, who assured that Benin Republic would always remain on the side of Nigeria in the fight against terrorism and corruption, pointed out that President Buhari took over the mantle of government “at a time terrorism occasioned by the activities of Boko Haram is high”.

He said: “To fight terrorism, Benin is ready to send about 800 men to join the men that are already prepared to fight terrorism. The team is battle ready for deployment. The will power is there and Benin is committed to deploying the men. Benin will always remain on the side of Nigeria in its trying times”.

Mr. Yayi, who will be handing over to a new leader next year, also said that falling price of oil in the international market was hindering the fight against the Boko Haram insurgency.

According to him, “The sub-region is also going through serious problems of development. Fighting Boko Haram is becoming difficult because the Organisation of Petroleum Exporting Countries (OPEC) countries are going through oil crises. We will always stand beside Buhari in his fight against corruption”.