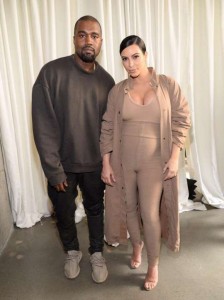 On December 7, the celebrity duo took their son from the LA hospital where he was born to Kris Jenner’s home.

Kim and Kanye are staying with the mother of the Kardashian clan while their home is being remodeled.

The celeb couple was spotted taking their son in a Range Rover with tinted windows.

A source speaking to US Magazine said “They are so ecstatic. Kim and Kanye are both so happy he’s here, and Nori is already in love.“

The name Saint was chosen because of the baby’s miraculous conception.
The 35 year old reality star had already revealed on her reality series ‘Keeping Up With the Kardashians’ that she had difficulty trying to get pregnant for the second time.