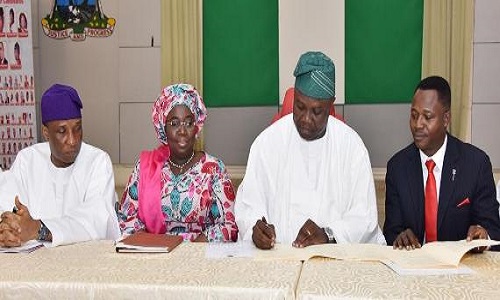 Governor Akinwunmi Ambode of Lagos State on Monday assented to the 2016 Budget, saying it would be primarily driven by Internally Generated Revenue.

Mr. Ambode said this while signing into law the 2016 Appropriation Bill at the Lagos House, Alausa, Ikeja.

It was presented to him by Rotimi Olowo, chairman, Lagos State House of Assembly Committee on Economic Planning and Budget.

Mr. Ambode had presented the budget of N662.588 billion to the Assembly for consideration on December 17.

“Consequently, I appeal to all tax payers to fulfil their civic obligations as we promise to leave no stone unturned in delivering value for every Kobo spent”, he said.

Mr. Ambode said the budget would enable his administration focus on the present challenges of security, traffic gridlock resolution, as well as physical and social infrastructural development.

He said those challenges had thrown up new ones quite different from past experience.

According to him, the total revenue estimate for 2016 fiscal year is N542.873 billion, which shows that the balance of N119.714 billion will be funded through deficit financing.

He said the capital expenditure was N386.933 billion and recurrent expenditure of N275.655 billion with an aggregate capital to recurrent ratio of 58:42.

The governor commended the legislature for expeditious passage of the bill.

Giving the breakdown, Akinyemi Ashade, the Commissioner for Economic Planning and Budget, said that Lagos state Internal Revenue Service was expected to generate N300 billion of the total IGR.

He said the estimated total revenue was N542.873 billion with the balance of N119.714 billion expected to be funded through a combination of internal and external loans.

This, the commissioner said would include the World Bank DPO 3 loan which could not be accessed in 2015.

He said that the IGR was approximately N419.826 billion of the total revenue.

“We do not intend to introduce new taxes in 2016 but rather bring more citizens into the tax net especially the informal sector through the adoption of an automated process to block leakages”, Ashade said.

He said the underlining principles of the budget included planned and systematic maintenance of existing and new infrastructural facilities as well as completion of ongoing projects.

Others are payment of outstanding liabilities, sustenance of goals of job creation, poverty eradication and wealth creation.

He said that education was given priority with total funding of N86 billion.

The commissioner said the state government would spend N89.9 billion on the construction, rehabilitation and maintenance of roads and public buildings.

“We will be advancing the 10-lane Lagos -Badagry expressway and commence rehabilitation on others spread across the state that have been provided for in the budget”, he said.

On transportation, he said N48.9 billion would be spent on various transportation initiatives such as the completion of the Blue rail line and expansion of BRT corridors.

On Agriculture and Food Security, he said the sum of N6.8 billion had been allocated to cover the state’s accelerated food expansion programme on rice production, animal husbandry and root crops.

“We are collaborating with a northern state in the development of a commodity Value Chain, specifically on rice production”, Ashade said.

He said N2.2 billion had been earmarked for tourism, while N6.2 billion was allocated for commerce and industry, ongoing development of Lekki Free Zone and industrial park at Imota and other areas.

Mr. Ashade said that the Wealth and Creation sector got N25 billion, while Women Affairs was allocated N1.82 billion for various initiatives for women and maintenance of skill acquisition centres, among others.

“Wealth and Creation received due attention under this budget with commencement of the implementation of the Employment Trust Scheme.

“A sum of N25 billion will be earmarked for this initiative over a four year period”, he said.

Mr. Ashade said N17.6 billion was earmarked for provision of potable water, while N25.3 billion would be spent on housing.

He said N46.9 billion was allocated to the health sector, while N2.3 billion was earmarked for sports development.

Mr. Ashade said N1.4 billion was allocated for Youth and Social Development, while 10.8 billion would be spent on governance.

He said 6.5 billion was set aside for pensions, while N9.6 billion and N23.5 billion would be spent on Science and technology, and security, law and order, respectively.

Mr. Ashade assured that the budget would provide opportunity for employment and growth. (NAN)