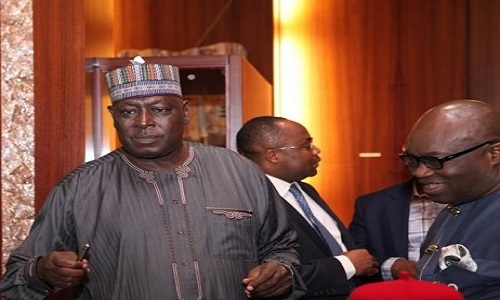 The Secretary to the Government of the Federation (SGF), Babachir David Lawal on Monday declared that “Corruption” is the main opposition confronting the All Progressives Congress-led federal government, not any political party.

Engr. Lawal stated this in his office when a delegation of a Coalition of Progressive Political Parties led by national chairman of the Peoples Democratic Movement (PDM), Mr. Ibrahim Yusuf Bashir, paid him a visit.

According to the SGF, the unusual but powerful opposition known as corruption, has enormous resources with which it has launched a propaganda war.

He, however assured that the government, because of its honesty, integrity and sincerity of purpose, will prevail in the ongoing crusade against graft.

Mr. Lawal also expressed optimism that the war will be won because the people of Nigeria and God are behind the Buhari Administration.

A statement by the Director of Press in the Office of the SGF, Bolaji Adebiyi, quoted the SGF as saying what the federal government is now focused on is good governance, which will result in rapid development and growth to the nation.

He also used the occasion of the visit to reiterate his admiration and support to the Governor of Ebonyi State, Dave Umahi, for the impressive development that is taking place in Ebonyi State, despite being in the opposition Peoples Democratic Party.

The SGF stressed that President Muhammadu Buhari is a meticulous, honest and just leader who will ensure that Nigerians will soon start enjoying the change that he promised during the 2015 elections campaign.

Earlier, leader of the delegation, Mr. Bashir, congratulated the government of President Buhari for the determination and efforts it has committed to fighting corruption in government.

He pledged the support of all the political parties that form the coalition to the federal government in the war and stated that their position is driven by patriotic reasons.

The PDM chair, however, said emphasis must, indeed, be placed on the ethical revolution of the administration so that Nigerians can own the change agenda in all ramifications.