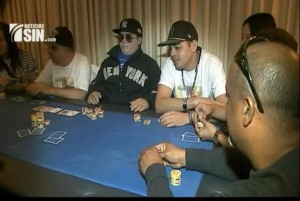 A 31-year-old Puerto Rican poker fan who died recently was treated to his hobby one last time when his body was seated at a card table during his wake. The family of Henry Rosario Martinez, 31, contacted the Eternal Light Funeral Home in Barceloneta after his Jan. 19 death and asked that the man’s remains be embalmed, dressed and seated at a poker table during his wake.
“It’s the first time we did this here, but we take it as something normal, because they have done these things in other parts of the island,” funeral home owner Jose Mendelez told EFE.
Martinez’s wake included poker games with the corpse seated at the table and friends and family posing for pictures with the deceased.
“I want him to be remembered as a happy person because he was always like that,” mother Sonia Martinez told Primera Hora. Wakes featuring the remains of deceased arranged in lifelike poses are becoming increasingly common in Puerto Rico, with recent examples including a paramedic posed in the back of an ambulance and a man posed at a table playing dominoes.
N’ Scoop.
AdvertisementClick Here To Join The 10,000 Naira Giveaway For 100 People!