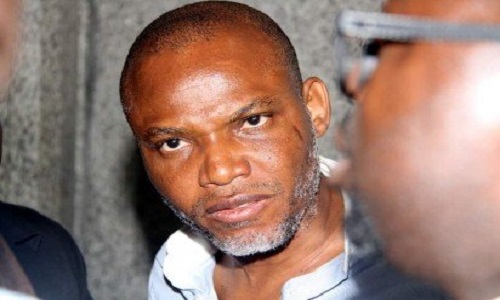 The Indigenous People of Biafra (IPOB) has raised an alarm over the deteriorating health of its incarcerated leader and Director of Radio Biafra, Mr. Nnamdi Kanu, who is being held by the Department of State Service (DSS).

Addressing newsmen, yesterday, in Nnewi, IPOB Media and Publicity Officer, Mr. Emma Powerful alleged that the Federal Government through the DSS has perfected plans to systematically kill Kanu in the DSS cell by denying him doctors’ attention and subjecting him to torture on daily basis.

“Information from a reliable DSS source revealed that the Federal Government is also planning to transfer Mr. Kanu to a particular cell in the country where members of Boko Haram are detained, and it is their plan to kill him there,” he said.

“President Buhari and DSS will have no defence if they allow Mr. Kanu to die in the hands of DSS, more so when two competent courts of jurisdiction have granted him bail. To be forewarned is to be forearmed. A word is enough for the wise. Nobody is sure of his health condition now, and therefore, Kanu should be released and allowed to see his doctors.

“The present administration’s continued detention of Kanu when the courts had granted him bail is a flagrant abuse of power and lawlessness on the part of President Buhari and the DSS, and Nigeria is gradually reverting to dictatorship.

“The President is behaving as if he is above the law. Why can’t he respect the law if he has regards for democratic government, or is this the change he is talking about, going from lawfulness to lawlessness?” he asked.