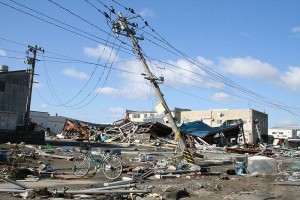 In a chilling turn of events, some taxi drivers in Japan are claiming to have picked up ‘ghost passengers’ in the aftermath of the tsunami that devastated the nation in March 2011. As many as seven of the 100 drivers interviewed by Yuka Kudo, a student of sociology at Tohoku, admitted to having encountered phantom fares.

Kudo conducted the interviews as a part of her graduation thesis, traveling to the coastal town of Ishinomaki every week for a year to speak to taxi drivers waiting for fares. She asked over 100 drivers the same question: “Did you have any unusual experiences after the disaster?” Many of them ignored her, some even got angry, but seven drivers agreed to describe their strange encounters. One driver recounted a particularly unsettling story – in the summer of 2011, a woman dressed in a coat climbed into his taxi near Ishinomaki station. She said, “Please go to the Mianmihama Station.” When he pointed out that there was nothing left standing in the district, she asked him in a shivering voice, “Have I died?” The driver immediately turned around, only to find the back seat empty.

Another driver recalled how a young man who looked to be in his 20s got into his taxi. When the driver looked in the rear-view mirror for directions, the man kept pointing towards the front. The driver then asked for a destination, to which he replied, “Hiyoriyama” (mountain). When the taxi reached the area, the man had disappeared from the taxi.

It’s easy to dismiss these stories as hallucinations or imaginations, but the drivers’ logs are proof that they really might have occurred. When these ‘ghosts’ got into their cabs, the drivers started the meter, which is recorded. So even though these passengers disappeared during the ride, they were still counted as clients. The drivers then had to pay their fares out of their own pockets. Some of the drivers even wrote down their experiences in their logs.