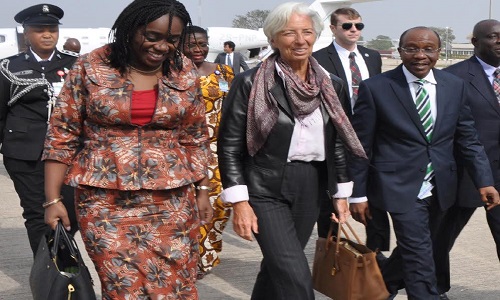 President Muhammadu Buhari will hold talks with the International Monetary Fund (IMF) managing director, Christine Lagarde, on Tuesday as Nigeria seeks to find its way out of an economic crisis fuelled by plunging oil prices.

The IMF said on Monday Lagarde would meet Buhari and his Finance Minister, Kemi Adeosun.

“I look forward to productive meetings as they address important economic challenges, most importantly the impact of low oil prices”, Reuters quoted Lagarde as saying in a statement.

The statement gave no other details, but the meeting suggests an acknowledgement of Buhari’s efforts to revive Africa’s largest economy.

He was elected in March after a campaign in which he promised to clamp down on the endemic corruption that has left many Nigerians mired in poverty despite the country’s enormous energy wealth.

He then announced a record budget for 2016, forecasting a doubling of the deficit to 2.2 trillion naira ($11 billion) and a tripling of capital expenditure intended to help the country adjust to the downturn in oil, which has lost around two-thirds of its value since mid-2014.