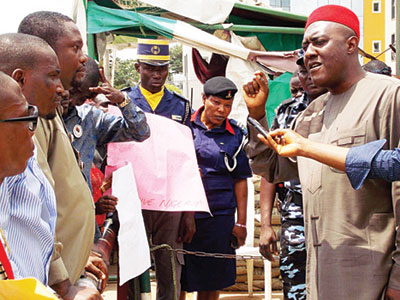 A Peoples Democratic Party (PDP) group under the aegis of PDP Youth Vanguard has stormed the national secretariat of the party in Abuja to protest the arrest of the party’s national publicity secretary, Chief Olisa Metuh, by the Economic and Financial Crimes Commission (EFCC).

The EFCC on Tuesday invited the PDP spokesperson to answer some questions but was detained overnight at the commission’s headquarters and was yet to be released at the time of this report.

The protesters, who spent about 25 minutes at the party’s secretariat, also carried banners and placards with inscriptions such as “No to selective justice” among others.