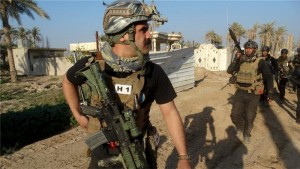 More than 20 Iraqi civilians have been killed in two air strikes on towns held by the Islamic State of Iraq and the Levant (ISIL) group in the west of Anbar province, military sources say. It was not immediately apparent whether the air strikes, which took place on Thursday in the towns of Heet and Rutbah, were carried out by the US-led international coalition, or Iraqi air force planes, Al Jazeera’s Imran Khan reported from the capital, Baghdad.

“What we do know is that at least 24 civilians are reported to have been killed, including seven children and nine women,” he said. “We don’t know yet if the air strikes were carried out by the coalition or Iraqi military.”

Iraqi forces and ISIL are engaged in battles across Anbar, especially around the urban centres of Ramadi – which is now largely controlled by government forces – and Fallujah, which is still held by the fighters. Since being pushed from the centre of Ramadi in late December, ISIL has launched near-daily attacks on Iraqi forces, especially on the outskirts of the city.

The attacks continued on Thursday, with an ISIL suicide car bomber killing at least 20 members of the joint Iraqi army and Popular Mobilisation Force stationed at al-Subaihaat village, east of Ramadi. “The Iraqi forces’ battle against ISIL is clearly continuing in areas of Iraq which were thought to be secure,” Khan said.