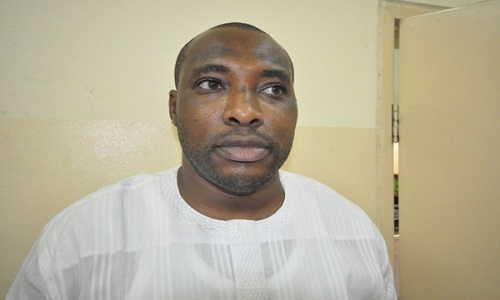 The Economic and Financial Crimes Commission on Tuesday re-arraigned the duo of immediate past Kwara State Commissioner for Information, Olatunji Moronfoye, and Ope Saraki, cousin to the Senate President, Bukola Saraki before Justice Oluremi Oguntoyinbo of the Federal High Court sitting in Ilorin.

The duo were charged for offences bordering on abuse of office, diversion of public funds and money laundering.

Messrs Moronfoye and Saraki, who were first arraigned on Wednesday, May 13, 2015, had to re-enter their plea Tuesday following the transfer of the former trial judge, Justice A. O. Faji.

Mr. Moronfoye, while being the Special Adviser to former Governor Saraki (now Senate president) allegedly used his position to corruptly enrich himself.

He was specifically accused of awarding contracts to the tune of N200million (two hundred million naira) for the renovation of Ijagbo Primary Health Centre and Specialist Hospitals within the State to a company in which he has interest and was sole signatory to its account.

In one of the transactions involving purchase of buses for the State, Mr. Saraki allegedly procured thirteen Hiace buses from a “Local Car Dealer” and converted same to ambulance instead of a factory-built ambulance for which a contract of N171,990,000.00 (one hundred and seventy one million, nine hundred and ninety thousand naira) was awarded to Chemiroy Nigeria Limited.

One of the counts reads:
“That you, Ope Saraki, being the Special Adviser on Millennium Development Goals (MDG) to Governor of Kwara State sometime in 2012 at Ilorin within the jurisdiction of this Honourable Court did by undue interest conducted procurement fraud in the procurement of 13 units of ambulance for 13 General Specialist Hospitals in Kwara State at the sum of N171,990, 000.00 (one hundred and seventy one million, nine hundred and ninety thousand naira only), a contract awarded to Chemiroy Nigeria Limited and thereby committed an offence contrary to Section 58 (4) (b) of the Public Procurement Act, 2007 and punishable under Section 58 (5) 0f the same Act”.

Moronfoye and Saraki, at yesterday’s sitting, again pleaded not guilty to three and five counts preferred against them respectively.

In view of their plea, counsel to EFCC, Joseph Uzor asked the court for a date to commence trial.

However, J. O. Olatoke, SAN and S. I. Abaya representing the accused persons prayed the court to allow the defendants continue with the bail terms earlier granted them by the first trial judge, Justice Faji, having not breached the terms.

Justice Oguntoyinbo, in response to both counsel’s applications, adjourned to April 4 and 5, 2016 for trial and ordered the accused persons to continue with the bail earlier granted them.

Justcie Faji had on May 13, 2015 admitted Messrs Moronfoye and Saraki to bail in the sum of N50m (fifty million naira) and two sureties in like sum. The sureties must produce “Certificate of Occupancy” of landed property within urban area of Ilorin and must swear to affidavit of means.

The sureties must also produce evidence of tax payment for three years. The accused persons must be reporting to EFCC Head Office, Abuja every three weeks and must notify EFCC whenever they intend to travel.

While Mr. Moronfoye retains custody of his “International passport”, Mr. Saraki, under the said bail terms, would have his deposited with the court.