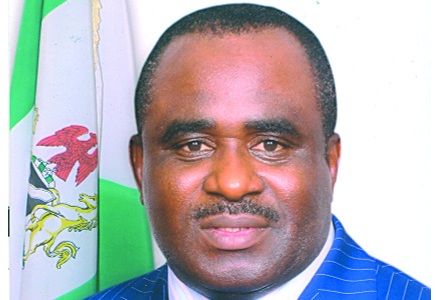 The immediate past Director General of the National Agency for Food and Drug Administration and Control (NAFDAC) Dr. Paul Orhii, has beat his chest on his tenure at the agency, saying he is leaving behind a robust institution that will outlast any successor.

Mr. Orhii stated that with limited resources, the agency had recorded tremendous achievements in terms of infrastructural development, capacity building of both staff and other critical stakeholders as well the use of cutting edge technologies that has positioned NAFDAC as a global leader in the fight against counterfeit regulated products.

He, therefore, enjoined the staff to support and cooperate with the incoming Director General to move the agency to the next level, even as he handed over to the most senior staff in NAFDAC, Mrs. Yetunde Oni‎, the director of administration and human resources.

Responding, the acting Director General of NAFDAC, Mrs Oni, hailed the passion and relentless efforts of Dr. Orhii whom she said worked meritoriously in repositioning the agency as a leading light in the fight against counterfeit regulated products globally.

She promised to build on the strategies left behind by Dr. Orhii to deliver on the mandate of the agency.

Mrs Oni called on the support and cooperation of staff and challenged them to work tirelessly to sustain the legacies left behind by the erstwhile DG to move the agency to greater heights.

Also speaking, a former Director of Narcotics and Controlled Substances in the Agency, Mr. Hashim Ubale Yusufu, noted that NAFDAC under Dr. Orhii had reduced the prevalence of counterfeit antimalarial medicines from 40% in 2009 to 3% in 2015.

Dr. Orhii assumed office as DG of NAFDAC in 2009 until his recent disengagement on February 15, serving out seven years.