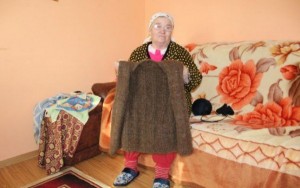 Romanian woman Ortansa Pascariu is the proud owner of a very unusual piece of wardrobe – a vest made of her own hair! Ortansa had been collecting fallen strands of her hair for 20 years, and when she thought she had enough, she decided to use it for a unique garment. The 65-year-old revealed that she started collecting her hair in accordance with a tradition followed in her hometown of Stauceni, in the north-eastern part of Romania. The practice suggests that women should never throw away their hair if they want to retain their beauty and good luck.

“I heard from elderly friends that women should not throw their lost hair away after combing,” she said. “They need to keep it. If not, the elderly say, it is as if you are throwing away your beauty. I started gathering my hair when I was 40 and by the age of 60 I had managed to gather one kilo, which was as much as I needed for a vest.”

Ortansa explained that she only saved the hair that had fallen out as she combed it. She always had long hair that reached her hips, so all the strands in her collection were nice and long, making them perfect for knitting. She used two strands to make a single thread, and then used the threads to knit the vest, completing the project in only one week.

“It was strange, but also very pleasant to knit something in your own hair,” she said. She doesn’t wear it though – after keeping it for about five years she gifted it to the local ethnographic museum, where it is currently on display. Ortansa’s husband Vasile expressed pride in her unique craftsmanship. “I’ve touched it and it’s like some kind of soft wool,” he said. “I’m very proud of what she managed to do. It’s really complicated. The vest is also very nice.” This is not the first time we’ve seen clothing items made exclusively from human hair. In 2010, Vietnamese hairdresser Kim Do created a unique tunic from one million meters of human hair.