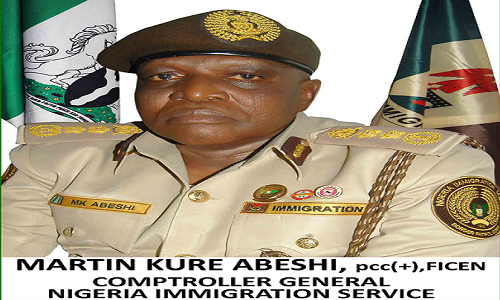 The Comptroller-General (CG) of the Nigeria Immigration Service (NIS), Martin Abeshi, has faulted a statement credited to the immediate past Interior Minister, Abba Moro that the service lacks the capacity to produce international passport booklets and the Combined Expatriate Residence Permit and Aliens Card (CERPAC).
The comptroller general stated that the NIS has the capacity to produce the two security documents, if adequately funded.
Moro had while appearing at a public hearing organized by the House Committee on Interior last Wednesday, claimed that the agreements the immigration service entered into with different private companies were not judiciously implemented.
But reacting to this at the weekend in a chat with newsmen, Abeshi said the service has well-trained personnel who could produce the international passport booklets and the CERPAC.
According to him: “Moro is entitled to his opinions. If he says we don’t have capacity to produce international passport, what did he do about that in the period he stayed as Minister of Interior?
“I don’t believe we don’t have the capacity to produce passports. We have it with the calibre of staff by their training and we have more than enough if available funds are given to us”.
Abeshi, who assured Nigerians that criminal minded migrants were not getting access into the country any longer, also claimed the service was properly equipped to fish out all illegal immigrants already in the country.