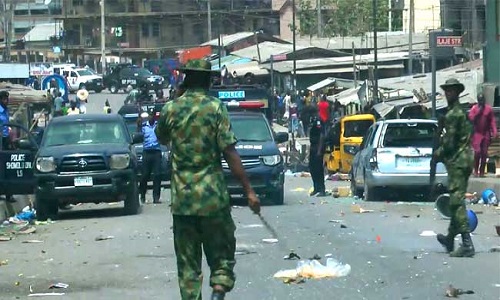 The Afenifere Renewal Group (ARG) has urged the Lagos State Government to immediately constitute a judicial commission of enquiry into the recent riots in Mile 12 area of the state, saying the approach of the police was biased.

It would be recalled that the Lagos Commissioner of Police, Mr. Fatai Owoseni, had vehemently denied allegations that the security agencies, especially the police, took sides in the bloody clash between Hausa traders and their Yoruba hosts.

The ARG, in a statement on Sunday, however, noted that the state government could not rely solely on police investigation because its own inquiry into the incident showed that the police approach lacked objectivity.

The statement signed by ARG’s Publicity Secretary, Kunle Famoriyo, added: “In our view, therefore, only a judicial enquiry can produce the kind of recommendations and shift-change that will engender peaceful and sustainable cohabitation in that area of the state.

“ARG notes that Nigeria’s history is replete with several of such ‘move-ons’ and that is why such calamities are recurring. A different approach is needed so that we stop planting evil seeds that will germinate into abominable trees in the nearest future.

“ARG therefore calls on the Lagos State government to constitute a judicial panel, made up of credible citizens to investigate the immediate and remote causes of this mayhem.

“Apart from the safety and security threats that okada pose to our society, it is also luring youths away from their vocations to the effect that largely all artisanal works in the South-west are now being carried out by migrants from neighbouring countries”, the statement said.