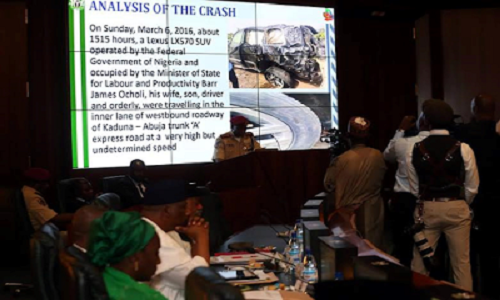 An investigation by the Federal Road Safety Commission (FRSC) into the road accident that claimed the lives of the Minister of State for Labour and Employment, James Ocholi (SAN), his wife, Blessing and their son, Joshua on Sunday, has blamed the accident on Taiwo Elegede, the driver of the vehicle.

The accident occurred along the Kaduna-Abuja expressway when the Lexus SUV carrying the minister suffered a burst tyre while on motion.

The FRSC disclosed that apart from the driver’s high speed, failure to use seat belts by the deceased minister and his family members decreased their chances of survival when the vehicle reportedly summersaulted several times.

It added that by theory, the occupants of the front seats received less injuries because they made use of their seat belts.

The FRSC investigation also revealed that Mr. Elegede had no valid driver’s licence.

The outcome of the investigation was read on Wednesday by the Corps Marshal of FRSC, Boboye Oyeyemi, during a valedictory session of the Federal Executive Council in honour of the late Ocholi at the Council Chambers of the Presidential Villa, Abuja.

“There were 10 persons involved in the accident and 9 were adults. The minister and his son died on the spot, while his wife died at the hospital. The driver of the crashed vehicle was moving at excess of the stipulated speed when he had a tyre burst.

“The investigation team gathered that the driver of the backup vehicle had noticed that the minister’s vehicle rear left tyre was under-inflated, and availability of radio communication deprived him of access to the minister’s driver”, Mr. Oyeyemi said.

According to Mr. Oyeyemi, further checks showed that the driver’s details were not registered on the FRSC data base as a licensed driver.

“There was no record on the driver’s licence national database of the driver of the Hon. Minister with the name Taiwo James Elegbede”, he said.

“The Dunlop tyres of the SUV were not expired but were wrongly fixed and could have affected its performance.

“The situation would have been salvaged if there had been a mode of communication between the minister’s car and the backup car, as the latter had noticed the state of the tyres and tried to stop them.

“The crashed vehicle’s driver was driving too fast and he slammed on his brake so hard. These two factors materially contributed to the inability of the driver to maintain control when the left rear tyre burst.

“Skid marks and grooves found on the westbound shoulder made by the Lexus LX570 for about 15m and 9.3m respectively before it began somersaulting severely and the ejection of the minister and his son showed clearly that the traveling speed of the Lexus LX570 presented unsafe consequences in the event of certain road risk that may have occurred.

“The driver must have entered into a panic situation which resulted to his hard application of brakes and subsequent loss of control that took him into the bush path.

“The Federal Road Safety Corps Investigation Team (FIT) determines that the probable cause of the March 6, 2016 fatal crash at KM34 Kaduna -Abuja expressway near Rijana village, Kaduna State, was the driver’s failure to maintain directional control of his vehicle when the rear left tyre burst occurred.

“Severity of the fatality was increased due to the ejection of the minister and his son as a result of non-use of rear seat belt”, Mr. Oyeyemi said.

The FRSC boss also called for adherence to traffic rules, repairs of potholes on highways just as he urged President Muhammadu Buhari to lead the campaign on compliance with speed limits, starting with installation of speed limiting devices in commercial vehicles.