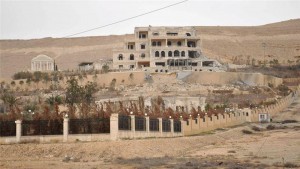 The Syrian army has advanced against the Islamic State of Iraq and the Levant (ISIL) as both sides battled for control of the strategically located city of Palmyra.  The UK-based Syrian Observatory for Human Rights said on Saturday that the government had managed to capture al-Amiriyah town on the northern outskirts of Palmyra.

“The Syrian army is pushing forward from the western parts of the city. Backed by government rocket attacks and air strikes, the army is advancing in its offensive to retake the ancient city of Palmyra,” the observatory reported on their website. Al-Amiriyah town is considered the last line of defence for ISIL, Syria’s state news agency, SANA said on Saturday.

“The operations have resulted in establishing full control over the neighborhoods of al-Mutaqaidin, al-Amiriyah and al-Jamiyat al-Gharbiyeh in Tadmur city, according to sources on the ground,” SANA reported. SANA said on Saturday that the ancient citadel had been massively damaged by ISIL as it fled into the city. Palmyra’s ancient Roman temples and archway, blown up by ISIL last year, would be restored once the regime recaptured the city, the head of the antiquities authority, Mamoun Abdelkarim told the Reuters news agency on Saturday.

Abdelkarim told Reuters he hoped Palmyra would be retaken within days, after government forces fought their way into the western and northern parts of the city, and promised to revive the Roman-era monuments “as a message against terrorism”.