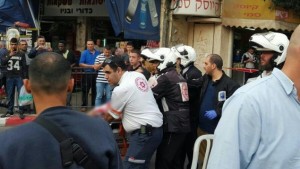 An Israeli man who was stabbed multiple times Tuesday afternoon in a terror attack in Petah Tikva managed to remove the knife from his neck and use it to stab and neutralize his attacker, aided by the store owner, police said. The attacker, a Palestinian, died a few minutes later, police said.

The victim, later named as Yonatan Azarihab, an ultra-Orthodox man of about 40 who suffered multiple stab wounds to his upper body, was hospitalized in moderate condition. The store owner was not injured. The Palestinian assailant had followed Azarihab, who was collecting money for charity, into a wine shop on the central city’s Baron Hirsch Street and began stabbing him “multiple times” in the upper body in a “frenzied attack,” police said.

At one point, Azarihab managed to break away and fled the store, while the owner of the store hit the attacker and tried to subdue him, police said. The victim then returned to the store, pulled the knife out of his own neck, and stabbed his attacker.

Initial reports had said the stabbing may have occurred during an altercation; however, the incident was later confirmed by police as a terror attack. Magen David Adom paramedics said they treated Azarihab at the scene before taking him to the city’s Beilinson Hospital. Nati Ostri, a volunteer medic from United Hatzalah who also treated the victim, said he found the man lying on the floor outside a convenience store.