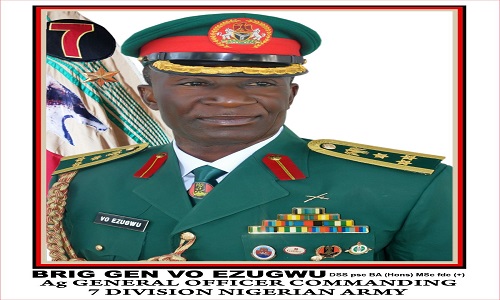 He said “although 1 soldier lost his live and 2 others were injured, they were able to clear the ambush, killing some of the terrorists and recovered vehicle and weapons from them”. Mr. Usman, a Colonel, said the recovered items include a Toyota Hilux vehicle, 2 AK-47 rifles and several ammunitions.

The Acting GOC has continued his operational visit to Bama, while the body of the slain soldier and the wounded had been evacuated to Maiduguri, the statement added.The statement added that the Chief of Army Staff, Lt.-Gen. Tukur Yusuf Buratai, has also spoken with the GOC.

“The Nigerian Army wish to reiterate its unalloyed commitment and determination to continue to clear the remnants of the Boko Haram terrorists wherever they might be hiding”, Usman said.
The attack came less than 24 hours after the terrorists launched a daring attack on troops of 113 Battalion at Kareto, northern Borno, but which was successfully repelled by the troops.