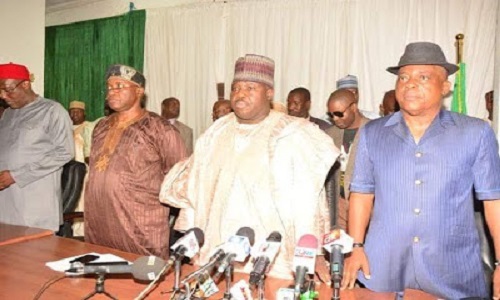 Members of the opposition Peoples Democratic Party (PDP) facing trial in any of the nation’s courts for corruption have been barred from standing for election into any position in the National Working Committee (NWC) of the party.
The party’s national convention comes up on May 21, in Port Harcourt, Rivers State.
An official of the party, who spoke to Daily Trust yesterday on the condition of anonymity, said that the party was looking for members of proven integrity to fill ‎various offices as part of efforts to reposition the party for victory in 2019.
He said this position of the party, perhaps, was behind the decision of the PDP national publicity secretary, Chief Olisa Metuh, to declare yesterday that he won’t contest for any position at the convention irrespective of the outcome of the zoning of national offices.
Metuh is currently facing trial on 7-count charges brought against him by the Economic and Financial Crimes Commission, EFCC, for receiving N400 million from the Office of the former National Security Adviser, ONSA.
The PDP spokesman, in a statement he issued, yesterday, said as one of the founding members and longest serving member of the NEC, and currently a critical player in the party, his supporters and admirers expected him to contest, but he won’t as being speculated in the media.
The statement read in part: “I wish to state publicly that I have no ambitions to continue as a member of the National Working Committee after the expiration of my current tenure as the national publicity secretary, a decision that is enjoying the support of my family.
“I therefore with every sense of responsibility confirm to all members of our great party, that I will not run for any position whatsoever, in the forthcoming national convention, irrespective of which office may be zoned to the South-east for that matter.
“What is paramount in my mind, at this point, is to continue to lift the image of our great party during the remaining part of my tenure as the image maker of the PDP, a position which, by the grace of God, I have been able to dutifully deliver to the best of my ability, despite daunting challenges”.