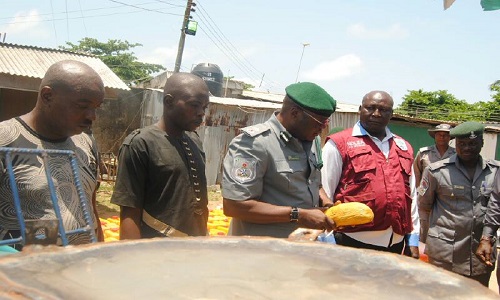 The Oyo/Osun Area Command of the Nigeria Customs Service has intercepted 226 kilograms of Cannabis Sativa, popularly called Indian hemp, concealed in fairly used imported clothes at the Oyo axis of the border between Nigeria and Benin Republic.
The illicit drug was said to have a street value of over N2.2 million.
It was learnt that the suspected smugglers abandoned their goods and escaped through the forest.
Addressing reporters at the Bodija, Ibadan Customs Area Command Headquarters yesterday, the Area Controller, Temitope Ogunkua, said the drugs were intercepted through intelligence gathering.
Also recovered were a fairly used cabstar (white) with chassis no 115666.
The vehicle was found to be loaded with 27 bales of fairly used clothes, one bale of Indian hemp and seven rolls of linen materials.
Others were a fairly used Mitsubishi Space wagon with chassis no JMBLNN43WS200132 and was loaded with six bales of used clothes, six rolls of linen materials, four bales of Indian hemp.
Mr. Ogunkua later handed over the Cannabis to the state Commander of the National Drug Law Enforcement Agency (NDLEA), Mrs. Omolade Faboyede.