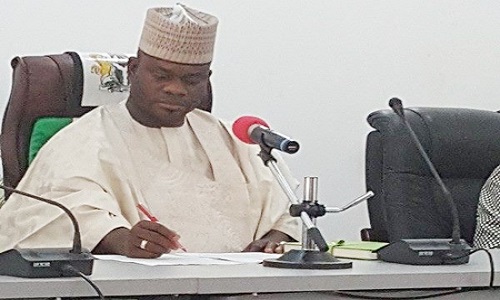 Governor Yahaya Bello of Kogi State has decried the role of some officials of the state civil service, who he said are constituting a cog in the wheel of progress of the state.
He said that the committee handling the ongoing workers screening at both state and local government levels discovered mind-boggling acts perpetrated by civil servants.
Addressing a crowd in Okene, headquarters of the central senatorial district of Kogi State on Saturday during a reception organized for him, Mr. Bello decried the ghost workers’ syndrome.
The governor revealed that the screening committee uncovered how a single person included “as many as 300 ghost workers in the payroll of a local government” at the detriment of development of the council area.
He, however, said his administration will not spare the perpetrators of the fraudulent acts after the ongoing screening exercise.
According to him: “It is ridiculous to discover that a single person without an iota of fear of God placed as much as 300 ghost workers on the payroll of a local government”.
He added that after the screening exercise, it is only the actual workers that will receive salaries from the state and local governments.
“This one person is just one of many in the business of siphoning public funds into their private pockets. We will ensure that the law take its course with those suspected of putting ghosts into the system so that it will serve as a deterrent to others”, said the governor.
The governor further said that workers’ welfare was his priority, noting that the state government has paid two salaries in less than two months of the present administration.
He said, “The temptation to use the money available for other things was great, but we have chosen to prioritise the welfare of our workers. In that regard, we have paid two salaries in less than two months.
“We paid the first batch of salaries across board and without asking too many questions even though we knew the nominal rolls were compromised. This was to help actual workers who needed money to handle their responsibilities.
“The second batch we paid with the personal guarantee of the Head of each Ministry Department and Agency (MDA) because we reasoned that change begins with each of us, and a leader should know those working under his immediate supervision”.
In his remarks, the Ohinoyi of Ebiraland, Dr. Ado Ibrahim solicited cooperation and support for the governor to enable him deliver the dividend of democracy.
The Ohinoyi also stressed the need for peaceful co-existence irrespective of tribe or religion.
“I am appealing to my people and indeed the entire people of the state to let peace prevail among ourselves. It is only in the atmosphere of peace that we can see and enjoy more dividend of democracy”, Ibrahim said.