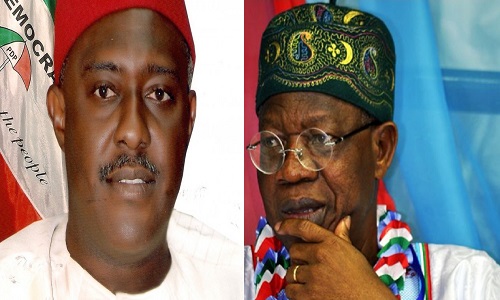 An Ikeja High Court on Wednesday ordered that the N500 million libel suit filed by Lai Mohammed, the Minister of Information and Culture, against the National Publicity Secretary of the Peoples Democratic Party, Olisa Metuh, should go to mediation court.
“The file should be taken to the Alternative Dispute Resolution (ADR) Prompt Administrator to set the ADR in motion”, Justice Oluwatoyin Ipaye of the Ikeja High Court ruled.
“Now that pleadings have been closed, seven days from today please head to ADR Centre for mediation of this dispute”, he added.
Earlier at the proceedings, Mr. Metuh’s lawyer, U.A. Otoahine, filed two applications dated April 25, which were granted by the court.
He said: “My Lord, the first application is requesting for an extension of time to file the statement of defence and originating processes.
“The second application is seeking an extension of time to file a counter-affidavit”.
The judge, however, refused to hear the application brought by counsel to the minister, Wahab Shittu, that the case should be set down for trial.
The News Agency of Nigeria (NAN) reports that Mr. Mohammed, a former spokesman of the All Progressives Congress (APC) had on Oct. 12, 2015 filed a suit against Mr. Metuh, accusing him of publishing libelous materials against him.
Mr. Mohammed alleged that Mr. Metuh had falsely accused him of embezzling funds meant to build a fence at an airport in one of the South-west states under the control of APC.
The publication also alleged that Mr. Mohammed had obtained funds to supply ambulances to the South-west state, but failed to do so.
The minister is demanding a compensation of N500 million on account of the alleged false publications against him.
Justice Ipaye adjourned the case to June 13 for a progress report from the ADR centre. (NAN)