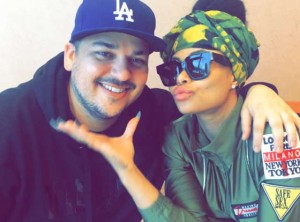 New reports say that Rob Kardashian and Blac Chyna are set to sign up a one million dollar deal to air their forthcoming wedding in a TV special.

According to TMZ, the couple is also looking into starting their own reality series which would see them paid between ‘$150-$200 thousand’ each per episode, as well as ‘$500 thousand’ each for the wedding day episode.

As we previously reported, Jenner signed an $80 million contract with E! which gave them four more seasons of their hit reality show, ‘Keeping Up With The Kardashians’.

Although Rob’s health has been a frequent topic on the series, he has not been seen or appeared in an episode since 2014.

Rob was spotted heading to his mom’s office in Los Angeles on Friday, April 8, the same day reports surfaced claiming that the reality star is hoping for a ‘quick wedding’ to fiancee Blac Chyna.

The 29-year-old didn’t fail to flaunt his slimmed down physique in the process as he carried a beamed smile on his face as he sauntered from his car to Jenner’s headquarters.

Meanwhile Chyna has opted to become her fiance’s new fitness trainer with the goal of getting him to 200kgs by May 11 (her birthday).