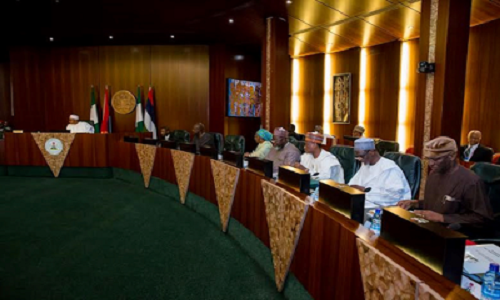 The Federal Executive Council (FEC) on Wednesday unveiled government’s 34 strategic priority projects for this year.
The priority projects were contained in a document presented by the Ministry of Budget and National Planning to the FEC chaired by Vice-President Yemi Osinbajo.
The Minister of State for Budget and National, Zainab Ahmed, who briefed State House correspondents at the end of the meeting, also disclosed that the government was expecting a final copy of the 2016 budget from the National Assembly for President Muhammadu Buhari’s assent.
Ahmed was flanked by the Ministers of Information, Lai Mohammed; Industry, Trade and Investment (State), Aisha Abubakar; and Foreign Affairs (State), Khadija Bukar Abba at the briefing.
According to her, the 34 priority projects were evolved with clear deliverable targets and are grouped into four broad objectives including security/policy governance, diversification of economy, succour for vulnerable‎ Nigerians and reflecting the economy through investments.
“We discussed the strategic implementation plan for the 2016 budget‎. Our ministry’s presentation was introducing to council for discussion priority economic activities that we need to undertake to ensure that the purpose for which the 2016 budget was made, which is to stimulate the economy, to create jobs for our teeming youths and to extend support to the poor and very vulnerable is realized”, she said.
“We presented 34 strategic priority programmes that need to be realised within 2016. Each of these projects have very clear deliverables and targets and indicators which will be measured to ensure that the respective Ministries, Departments and Agencies (MDAs) deliver on what we committed to implement.
“These 34 specific areas are grouped into four major objectives. The first is policy, governance and security, second diversification of the economy, the third‎ is creating support for the poor and the vulnerable and the forth is reflecting our economy through investment”, the minister added.
She said the 34 priority projects had been approved for implementation by FEC, while the Ministry of Budget and National Planning had been given the responsibility to track and report to the council on the performance of the key priority areas on quarterly basis.
Noting that the projects were categorized into six thematic areas, Ahmed noted that: “There is policy, governance and security and one item from that is to achieve and maintain a capital spend minimum of 30 per cent in an annual basis starting from 2016. The objective of doing that is to reflect the economy and enhance employment generation capacity for the productive sector.
“Another area is to achieve an appropriate exchange regime, the Central Bank of Nigeria (CBN) is leading this particular action. The objective is to achieve a predictable exchange rate by the end of 2016.
“There is also a target for us to increase low interest lending to the real sector. The focus is to achieve an interest rate that is single digit, maybe nine percent and the purpose is to increase output and growth. Again the Ministry of Industry, Trade and Investment along with CBN are taking action on this.
“We also have a target to maintain a stable debt management strategy so that we can optimize the local and foreign debts that we have and the Ministry of Finance and the Debt Management Office will be taking action on this.
“On the thematic area of diversifying the economy, we plan to implement measures to achieve self-sufficiency and become a net export of certain number of agricultural produce the first one being rice.
“We plan to attain self-sufficiency in rice production by 2018, in tomato paste 2016 and also increase local production of maize, soya beans, poultry and livestock. The deadline for these will be announced later in the year”.
The minister added that there are plans to expand the agro allied sector to intensify local production of cassava, cocoa, cashew nuts, fruits and sesame seeds.
Furthermore, she said: “There is also plan to make use of 5,000 hectares arable land in 12 River Basin Development Authorities and to utilise 22 dams for commercial farming by prospective investors and the objective is to extend farming so that it can become and all year round activity and that there is productivity all year round”.
She revealed plans to rehabilitate 5,000 primary health centres in 5,000 wards in 2016, noting that the objective is to deliver affordable health care services to Nigerians as closed as possible to their homes.