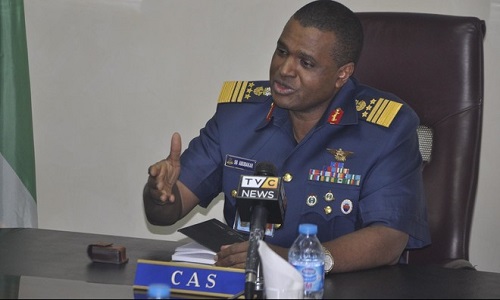 In a bid to improve its aerial capabilities, the Nigerian Air Force (NAF) has stepped up efforts to get its Unmanned Aerial Vehicles (UAV) also known as drones, fitted with guided missiles weapon systems.
The Chief of Air Staff, Air Marshal Sadique Abubakar made this known in Abuja on Tuesday during a meeting with the management of the National Space Research and Development Agency (NASRDA).
Abubakar noted that the NAF is leveraging on an existing Memorandum of Understanding (MOU) with NASRDA to fast track collaborative measures to improve the Force’s rocketry and missiles propulsion systems.
The Air Chief further noted that Research and Development is the bedrock of any organization or country that desires transformation into a super power.
According to him, new frontiers in military technology and warfare have great impact in the battlefield in which the air force plays a pivotal role.
He, therefore, pushed for initiatives that will improve the ability of air force helicopters and UAVs to target and deliver missiles and rockets from a very long range.
Mr. Abubakar lamented the fact that some fighter choppers in the inventory of the NAF have to fly as close as 1.5 kilometers to target before firing, saying this is dangerous for the pilot and the aircraft.
He also tasked the NASRDA team to work toward a system that will allow aircrafts launch their missiles from a distance of at least 3 kilometers range from targets.
Air Marshal Abubakar stressed that indigenous solutions to the technological needs of the NAF will save the country much needed foreign exchange from transfer of technology from abroad.
He added that it will also create an employment boom in the industry.
Fielding questions from Journalists, the Director of Engineering and Space Systems in NASRDA, Dr Femi Agboola, said the agency has the capacity to improve the missile propulsion needs of the NAF even beyond what the Air Chief requested.
“NASRDA has the capability to deliver on what the Chief has requested; the Chief has studied us for some time like he said since 2013, he has a feeling of our capability”, he said.
He continued: “The Chief talked about armaments, he talked about rockets and about missile programs, we have a rocket that goes beyond the level that he has requested, he said about 5 kilometers, we have already gone beyond that”.
Agboola further said: “we are already working on how to guide it, not just point and shoot straight line, but to be able to make sure it goes intelligently to another location and that is what we are being asked for and we are already working on that”.