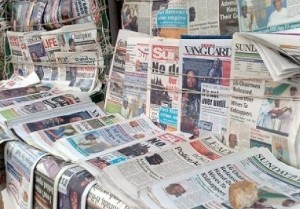 The federal government, yesterday, deployed an armada of five warships, 100 gunboats and fighter jets to the creeks of the Niger Delta, in response to continued bombing of oil and gas pipelines by Niger Delta Avengers, NDA.

The Inspector General of Police Mr ‎Solomon Arase has ordered the immediate disarmament of members of the Indigenous People of Biafra (IPOB).

Be ready to defend yourselves, Gani Adams to Yoruba

The National Co-ordinator of Oodua People’s Congress (OPC), Otunba Gani Adams, on Mondayurged Yoruba people to prepare to defend themselves against any external aggres

Federal Government has earmarked about N600m in this year’s budget to boost water supply and irrigation farming through the Zobe Dam in Katsina State. A member of the House of Representatives, Hon. Danlami Kurfi (APC, Dutsinma/Kurfi federal constituency) who stated before newsmen yesterday, said of the amount, about N300 million would be used for irrigation at the dam to boost food production. Kurfi also said a contract for the supply of water from the dam to communities in Dutsinma and Kurfi would soon be awarded.

I Never Promise To Refund N5m To EFCC – Madaki

The outgoing Chairman of the People’s Democratic Party (PDP) in Adamawa, Mr Joel Madaki, on Tuesday denied media reports that he promised to refund N5 million to the EFCC.

The All Progressives Congress(APC) in Ondo State has accused the state government of alleged diversion of the bailout funds as loans to members of NURTW, Artisans, market women in exchange for their voter’s cards. ‎