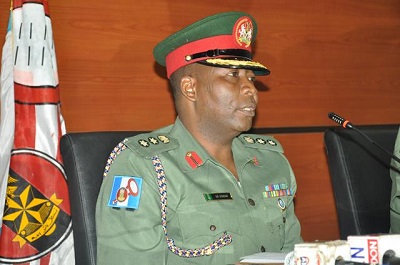 Amid unconfirmed reports in a section of the media that over 200 officers, mostly of southern origin and perceived loyalists of the immediate past administration were retired, the Nigerian Army has come out to deny the reports.
A particular online medium stoked ethnic and religious sentiments over the retirement when it released a list containing the names of those purportedly affected in the exercise.
Following the release of the names and photographs of the Army officers affected in the retirement exercise, some public commentators lampooned President Muhammadu Buhari for approving the exercise in order to purge the Army of southerners and replace them with his kinsmen from the north.
But the Army on Sunday described the reports and the reactions that trailed same as “unfair and unethical”, saying some of the officers, whose names were mentioned in the purported retirement list, were still serving.
The Acting Director, Army Public Relations, Sani Usman, in a statement last night, said the retirement was carried out in strict compliance with the country’s extant laws.
The statement reads in part: “The attention of the Nigerian Army has been drawn to speculations and rumours regarding the number and names of the senior Army officers affected in the recent retirement exercise.
“This is worrisome as some individuals and media houses went to the ridiculous extent of publishing outrageous figures and names of serving officers as being retired. This is unethical and unfair.
“We are quite aware that some mischievous elements are trying to whip up sentiments. This is quite unfortunate because all the affected officers were retired based on Service exigencies and in line with the Armed Forces Act, CAP A20 Laws of the Federation of Nigeria 2004”.
Mr. Sani, a colonel, also gave a breakdown of the affected officers by ranks.
“We wish to state that only 38 senior officers were affected by the retirement exercise.
“For the avoidance of doubt the following is the statistics of the officers retired compulsorily; 9 Major Generals, 10 Brigadier Generals, 7 Colonels, 11 Lieutenant Colonels and a Major”.
Col. Sani reminded the general public that the Nigerian Army is a professional institution that is based on highest standards of discipline and conduct, therefore, its personnel must remain professional, neutral and apolitical at all times.