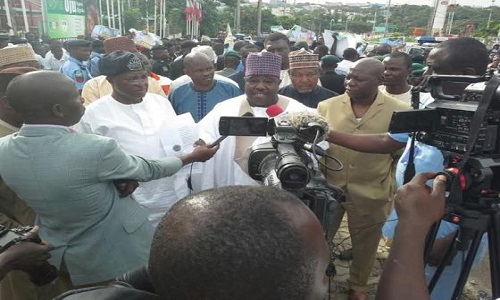 The crisis rocking the opposition Peoples Democratic Party, PDP, is far from over if feelers from the national secretariat of the party in Abuja, known as the Wadata Plaza, is anything to go by.
The immediate past chairman of the PDP, Senator Ali Modu Sheriff, has reportedly stormed the Wadata Plaza to take over the affairs of the party.

He was, however, prevented from gaining entrance to the secretariat by security operatives. The Board of Trustees of the PDP last week formally handed over the running of the party to the national caretaker committee headed by Senator Ahmed Makarfi.
The caretaker committee was appointed following the dissolution of the Sheriff-led National Working Committee at the e party’s national convention held in Port Harcourt, Rivers State on May 21, 2016.