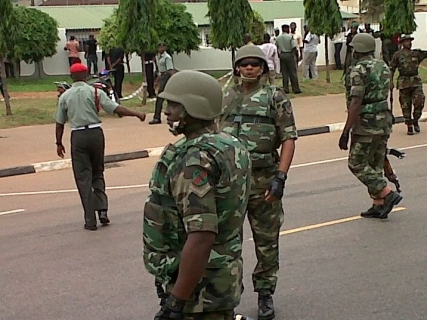 The Nigerian Army and the Police have issued a joint statement condemning the shootout by their personnel in the Borno State Government House on Thursday during a feud over distribution of rice by the government to Internally Displaced Persons, IDPs.

We earlier reported here that the shootout occurred when policemen directed to supervise the distribution of the food item, prevented some soldiers from benefiting from the gesture.

The incident, which caused panic around Government House, resulted in a policeman sustaining gunshot wound while two soldiers were reportedly disarmed and detained by the policemen.

In the statement, the army and the police said the incident was condemnable even as they vowed to investigate what went wrong and punish those culpable.

“In the morning hours of today, Thursday, June 23, 2016, there was an unfortunate fracas between a soldier and a policeman around the office of the Deputy Governor over a disagreement which led to the unfortunate shooting of a policeman on his foot.

“The policeman is responding to treatment and has been visited by the theatre commander, operation Lafiya Dole, Major General LEO Irabor and the Commissioner of Police, Borno State Command, Aminchi Baraya, both of whom went together to sympathize with the policeman.

“By way of background from the Permanent Secretary, Government House and Security, Mr Ahmed Sanda, the Borno State Government had on Sunday, June 19, 2019 began the distribution of rice to internally displaced persons living in the host communities of Maiduguri and Jere metropolis. The distribution was meant to take place at 28 wards of the two local government areas unfortunately, when the exercise was launched in old Maiduguri ward for Jere local government area and at Shehuri north ward for Maiduguri on Sunday, hoodlums overpowered the committee in both instances and made away with many bags of the rice meant for the displaced persons.

“As a result, officials tasked with the distribution shifted the exercise to two premises around the office of the Deputy Governor outside the Government House in order to ensure security of the food items while beneficiaries were identified and issued with allocation notes to give them access to the distribution centers. The exercise had gone smoothly since Sunday with some wards covered, until the unfortunate development today, Thursday.

“The Nigerian Army and the Nigeria Police Force in Maiduguri jointly condemn this unfortunate incident which was quickly brought under full control within minutes.

“The Army and the Police are jointly investigating the cause of the fracas with a view to ensuring that anyone found culpable amongst the security men are made to face disciplinary measures in line with laid down rules of the Nigerian Armed Forces.

“Findings and measures taken will be brought to public knowledge as soon as possible.

“The Army and the police operating in Borno assure the general public that they will continue to collaborate and work together towards their ongoing counter insurgency and civil security efforts that have led to the emerging peace in Borno State.

“The Army and the Police commands in Borno State call on all personnel to exercise restraint in the cause of their duties and should strive to respect one another and work together to secure innocent citizens and maintain peace”.