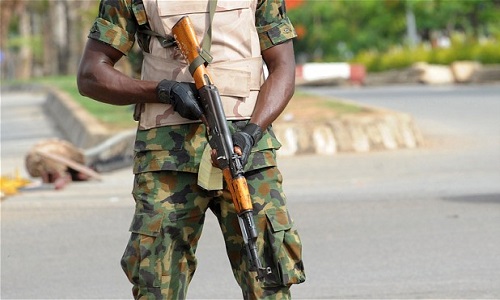 There was palpable tension in the air on Thursday at the Borno State Government House, Maiduguri, when policemen exchanged gunfire with a team of soldiers.

The exchange of ‘friendly fire’ between the security agencies took place when soldiers in a truck allegedly attempted to forcefully get a share of the rice being distributed to Internally Displaced Persons (IDPs) not living in camps.

It was learnt that the state government commenced the distribution of rice about a week ago in the Government House and directed policemen to ensure that the beneficiaries are genuine IDPs.

However, trouble broke out when the soldiers, who were reportedly in the habit of collecting rice since the distribution commenced without appropriate documentation, were denied the opportunity today.

Following the refusal of the policemen to allow the soldiers have their way, a shootout ensued, leaving at least one policeman injured.

It was not immediately clear as at the time of publishing this report who first started shooting but it was learnt that the policemen are currently holding two soldiers at the second gate of the Government House, while their soldier colleagues are at the first trying to free them.