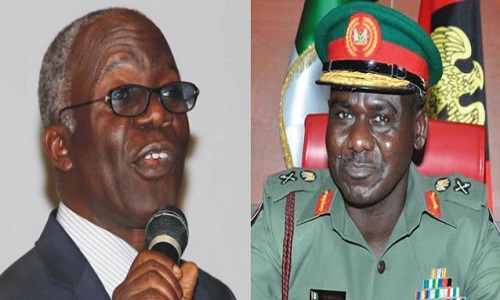 Falana, who was reacting to recent damning revelations that Buratai purchased proper­ties worth $1.5million in Dubai, the United Arab Emirates, asked President Muhammadu Buhari to sack him if he failed to voluntarily step down.

Although the Army chief had admitted owning properties with his two wives in Dubai, he said the money was from personal savings and was paid in instalments, and not proceeds of corruption.

But the online medium, which first broke the news of his foreign properties’ ownership, has continued to release vital documents and receipts as well as records of financial transactions, that contradict Lt.-Gen. Buratai’s claims.

While describing the Army chief’s position as a “cock and bull story”, the senior lawyer wondered how a General in the Nigeria Army could manage to save $1.5million, adding that Nigerians deserve to know how he saved the proceeds he used to buy the properties.

“If the Chief of Army Staff does not deem it fit to resign forthwith, President Buhari should not hesitate to remove him in the interest of national morality.

“In view of the ban on the opening and opera­tion of foreign accounts by public officers, the Code of Conduct Bureau should be involved in the investigation”, Falana said.

Mr. Falana stressed that for Buhari to show Nigerians that truly there was no sacred cow in the fight against corruption, “Buratai should step down and allow a full scale scale investigation by the Arms Procurement Panel and the Economic and Financial Crimes Commission (EFCC)”.