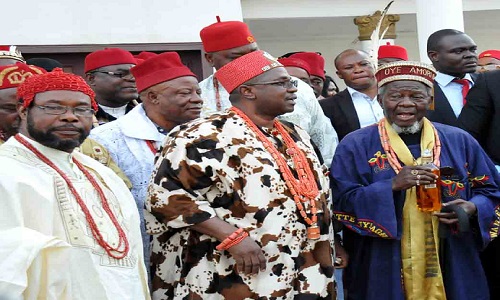 Some traditional rulers from the South-East geo-political zone yesterday appealed to the various youth groups currently agitating for a sovereign state of Biafra, to embrace dialogue with the federal government.

The monarchs made the appeal in a communiqué they issued after a workshop in Owerri, the Imo State capital.

The workshop with the theme: “Conflict Prevention, Peaceful Coexistence, Tolerance and Alternative Dispute Resolution for South-East Traditional Rulers”,  was organised by the Institute for Peace and Conflict Resolution (IPCR) and the United Nations Development Programme (UNDP) to strengthen the traditional rulers’ capacity in peace building and conflict resolution.

The workshop was attended by monarchs from Abia, Anambra, Ebonyi, Enugu and Imo states as well as representatives of governors of Abia and Imo.

The communiqué noted that traditional rulers and civil society organisations were critical stakeholders in the drive for peace in the zone.

“We recommend the continuation of appeal to the youths in the region currently engaged in self-determination struggle to embrace dialogue and peaceful methods. We further resolve that all Nigerians should embrace the principles of tolerance and peaceful coexistence”, the communiqué said.

They recalled that the zone had passed through myriads of violent conflicts, insecurity and developmental challenges in recent times and called on the federal government to five the South-East a sense of belonging.

“The self-determination groups, through their activities, are radicalized youths, which usually bring them into direct confrontations with the law enforcement agents resulting in avoidable fatalities, loss of revenue and economic incapacitation. The South-east is challenged by multiple conflicts and insecurities like cultism, attack on oil installations, herdsmen attacks, land disputes and self-determination campaign for Biafra fuelled by perceived marginalization”, the communiqué said.

“Federal and state governments should find creative ways to engage the already radicalised youths in dialogue. State governors within the region should equally see the need to create more economic opportunities to reduce unemployment. The conflict between farmers and herders and the resultant killings and destruction of farmlands should be addressed urgently.

“We implore the Federal Government to proffer an immediate, balanced and acceptable solution to the problem”, the communiqué said.