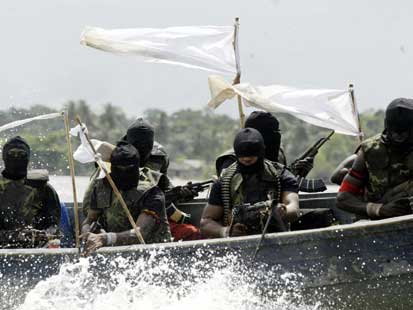 Two Suspected oil thieves were arrested in Bayelsa on Friday by the Joint Military Force in the Niger Delta known as Operation Delta Safe (ODS), the command said it also impounded a vessel involved in illegal bunkering activities in the state waterways.

The joint force said the impounded 300 metric tons capacity vessel is currently anchored at Forward Operation Base (FOB) in Formosso, Brass in Bayelsa.

According to reports by the News Agency of Nigeria (NAN), FOB Commander, Navy Capt. Mayowa Olukoya, handed the two suspects over to Operation Delta Safe.

The two suspects were caught while loading the barge with suspected illegally refined diesel, Capt. Olukoya said at the handover.

“On July 25, my men of Nigeria Navy Ship (NNS) Sorro and FOB were alerted of suspected illegal bunkering activities at Oluasiri near Nembe.

“On arrival, a barge was being loaded with substance suspected to be illegally refined AGO; two suspects were apprehended, while two escaped even as we are intensifying efforts to arrest them.

“We actually caught them in the act. The volume of the AGO so far loaded into the 300 metric tons capacity barge is yet to be ascertained,” Olukoya said.

He However, added that the three local boats used by the suspected oil thieves were set ablaze at the crime scene.