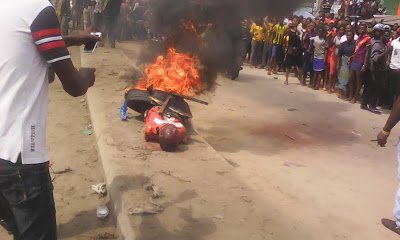 The end came for a suspected serial rapist in Ikorodu Area of Lagos State after he was caught and burnt to death by angry residents for allegedly having illegal sexual intercourse with eight-year-old girl.

According to reports, he was said to have been involved in this illicit act for a long period but met his waterloo after raping the said girl, which he did in an uncompleted building during the night vigil of one celestial church

He was said to have been caught while hiding in one primary school at Ibeshe Ikorodu and jungle justice was passed on to him.