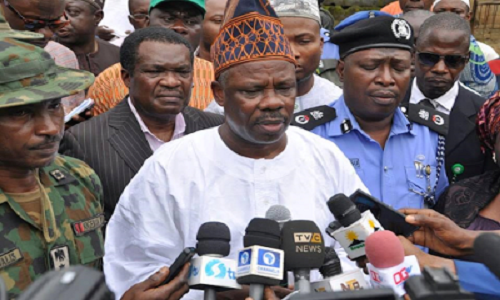 Amosun, who spoke yesterday while visiting the affected communities, called on the Federal government to ensure that the creeks, especially areas hosting petroleum pipelines, were cleared for proper visibility.

The Nigerian military is currently carrying out an operation codenamed “Operation Awatse”, which involves series of air strikes on camps of oil thieves in the Arepo area of Ogun State.

The governor, who was appalled by a large number of jerry cans the hoodlums use to siphon fuel from ruptured pipelines, noted that there was the need for the nation’s creek line to be cleared of shrubs and bushes that make it attractive for hoodlums to hide and rupture pipelines.

He said: “We have gone round this place they say is the camp of the vandals, and I must say I feel sad, sad because some of us can deliberately be engaging in this type of economic sabotage.

“But I will advise the Federal Government to embark on a deliberate policy to clear our creeks. All the shrubs and bushes 500 metres of our creeks should be cleared. As you can all see, this place is bushy and it is enough incentive to hoodlums to hide and operate. I want to believe this is how our creek is nationwide. We should be proactive and solve this problem”.

The governor, who was accompanied on the visit by the Deputy Governor, Mrs. Yetunde Onanuga; Speaker of the State House of Assembly, Hon Adekunbi Suraj; Secretary to the State Government, Barrister Taiwo Adeoluwa; Brigade Commander, 35th Artillery Brigade, Alamala, Ogun State; State Police Commissioner, Ahmed Illiyasu, and State Director of the Department of State Security (DSS), expressed appreciation to the service chiefs for their focus and determination to rid the country of all forms of criminality.