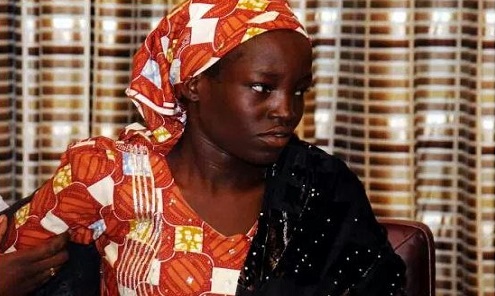 Binta Ali, the mother of Amina Ali, one of the Chibok schoolgirls rescued in May of 2016 after two years in Boko Haram captivity, has expressed fears that her daughter may never be the same again.

Mrs. Ali fears her daughter is being pressured to follow Islam, the religion she was forced to convert to by her captors.

Amina, her four-month-old baby and the father of her child, a Boko Haram fighter, who she claimed facilitated their escape from captivity, were rescued in May near Damboa, in the remote northeast, by soldiers working together with a Civilian JTF.

After a widely publicized meeting with President Muhammadu Buhari, in the hope she would shed light on the fate of the other kidnapped girls, Amina has since been held in a house in Abuja for what the Nigerian government has called a “restoration process”.

While the Senior Special Assistant to the President on Media and Publicity, Malam Garba Shehu, insists that Amina’s confinement in the house had nothing to do with religion, her mother, Binta, who has spent the last two months in the house, is concerned about her daughter’s welfare and future.

The Thomson Reuters Foundation quotes Mrs. Ali as saying that before her daughter was kidnapped in April of 2014 alongside hundreds of other schoolgirls from their hostel in

Chibok, she wanted to further her education.

Binta, who returned briefly to Chibok to seek medical treatment, said “But now she is afraid of schooling, and she wants to be close to me at home”.

According to her, Amina wants a sewing machine so that she can start a business making clothes.

Binta said she was also worried that her daughter was being pressured into following Islam, having been forced to convert from Christianity during her captivity.

“Amina herself does not want to remain a Muslim”, Binta said, explaining how an Islamic teacher had visited the house several times and told her daughter to maintain her new faith.

“She did not want to see him”, her mother said, adding that the teacher had stopped visiting after Amina complained about him.

Giving an insight of some of the tortuous experiences Amina and the other girls passed through, Mrs. Ali said starving and with nothing to cook with, the girls resorted to eating an entire bag of beans and maize raw.

“I cannot imagine how a human being can eat raw maize and beans like a goat”, Binta said.

Amina also told her mother how some of the abducted girls had died in captivity, while others suffered broken legs or went deaf after being too close to explosions. But she pleaded with her mother not to break the sad news to the families in Chibok.

“Other parents have been coming to visit me since I returned”, Binta said. “But I have not told them anything, even though I know some of those whose daughters have died”.

Despite her fears over her daughter’s religion and education, and uncertainty over when she will be allowed to return home, Binta said she still had reason to be positive about her.

“She used to be very afraid”, Binta said, explaining how Amina would talk to herself during the night prior to her kidnap.

“But now she sleeps soundly. She is no longer afraid”.