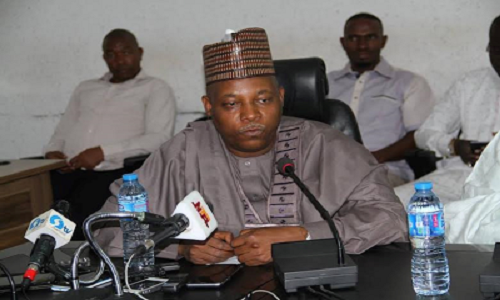 Governor Kashim Shettima of Borno State has described the outbreak of fresh cases of Wild Polio Virus (WPV) infection in the state as embarrassing to him.

There were two fresh cases of polio infections in Gwoza and Jere local government areas of the state last week, throwing spanner in the works of Nigeria receiving a certificate from the World Health Organization, WHO, declaring it polio-free.

Nigeria had to remain free of any fresh case of polio infection till 2017 to be certified polio-free after the last time an infection was recorded in the country was in June of 2014.

The Minister of Health, Prof. Isaac Adewole, who described the fresh infections last week as an unfortunate development, blamed the situation on activities of the Boko Haram insurgents.

The Nigerian military, which has been waging a war against insurgency in the North-east where Borno is located, was immediately called in to airlift polio vaccines to dangerous parts of the region as part of an emergency plan to immunize one million kids in four LGAs in Borno State with the number increasing to about five million when kids in the neighbouring states of Yobe, Adamawa and Gombe are also immunized against the virus.

Speaking Sunday in Mainok village, Kaga local government area where he launched a food and farming aide donated to the state by the Bill and Melinda Gates Foundation, Gov. Shettima also blamed the new cases on Boko Haram, which made some communities in the state inaccessible for polio vaccination between December 2013 and the end of 2015; as well as the earliest part of 2016.

The one-million-dollar aide targets 40,000 victims of the Boko Haram insurgency in the state, who are now being resettled in their communities.

The aide is in form of food distribution and provision of funds for farming activities.

Shettima said, “Back in November, 2013, the Bill and Melinda Gates Foundation even awarded Borno State for being the most committed to fighting polio in the North-East despite our insurgency. It is however unfortunate that last week, fresh cases of polio were identified in Borno. While this is officially painful and personally embarrassing to me, as an award winner in polio eradication, the basis of the recent outbreak of polio is largely due to the unimaginable condition we found ourselves.

“I have seen one commentator saying Borno was dragging the country backwards on polio eradication. From December 2013 to the end of 2015, we had hundreds of communities in 20 local government areas seized by Boko Haram; many roads were practically under their command; citizens including young children wandered for months around the deserts and forests, scampering for safety in the wake of attacks by Boko Haram on their communities; thousands of citizens were trapped in communities around the Sambisa, around the shores of the lake Chad and around territories being administered by Boko Haram; thousands, including pregnant women and children, were held captive by Boko Haram while hundreds of children were even born in captivity”.

He said the new diagnoses made were because some citizens, especially children, hitherto held captive had now been freed.

He, however, expressed optimism that the problem would be surmounted.

The governor said, “Everyone can bear testimony that it was impossible for the Government to have sustained its wide reach in polio immunisation under such an atmosphere of war.

“Now, under the current administration, most communities have been freed and this made it possible to diagnose the health of children held captive and those hitherto trapped.

“We all know that a problem identified is a problem half solved. Our communities are mostly free and this makes room for a critical round of aggressive polio eradication campaign in Borno.

“Unlike before, we don’t envisage the killing of health workers administering polio and other preventive vaccines in most of our communities which they couldn’t access since 2014. The tide has now changed. In the past, our people were those running but today, it is Boko Haram that is on the run”.