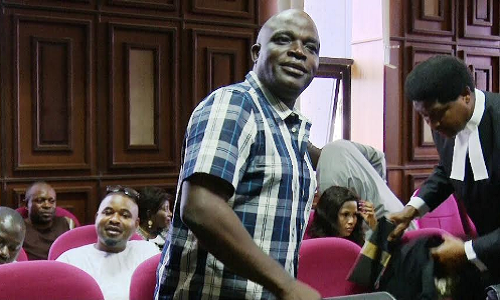 The Federal High Court, Abuja, has granted bail to Abiodun Agbele, an associate of Governor Ayodele Fayose of Ekiti State.

The court set bail for Mr. Agbele at N500million for alleged money laundering.

The judge, Justice Nnamdi Dimgba, who granted the bail on Thursday, ordered the applicant to produce two sureties in the sum of N250 million each.

Mr. Dimgba said the prosecution could not substantiate its claim that the defendant would jump bail.

“I note that the offence the defendant is charged with carries a sentence of three years imprisonment.

“Under Section 162 of the Administration of Criminal Justice Act (ACJA), I am required to release a person charged within the threshold of the penalties referenced above to bail.

“This is, however, except in circumstances where there is reasonable ground to believe that the defendant when released on bail will commit another offence.

“Taking a holistic appraisal of all the materials before me, I am not convinced that the prosecution has provided sufficient evidence as to stop the court from exercising its jurisdiction to grant bail.

“I hold, therefore, that I am inclined to admit the defendant to bail and I so admit him”, Mr. Dimgba declared.

He said every citizen charged with an offence was entitled to a conducive environment devoid of fear to prepare his defence.

The judge held that Mr. Agbele would forfeit the N500 million to the Federal Government if he jumps bail.

He said that the sureties could be private businessmen, professionals or civil servants, adding that if in the civil service, he must not be less than the rank of a director.

Mr. Dimgba said the sureties must also be owners of property within the Federal Capital Territory and in Ikeja or Victoria Island, Lagos.

The judge also ordered the defendant to deposit his international passports with the registrar of the court and must not travel abroad without the permission of the court.

He further said that the trial shall be accorded accelerated hearing and the defendant would remain in prison custody until he perfected his bail conditions.

Mr. Agbele was arraigned by the Economic and Financial Crimes Commission (EFCC) on Wednesday on an 11-count charge of money laundering.

Mr. Agbele had pleaded not guilty to all the charges.

Mr. Agbele and others are standing trial for conspiring among themselves to commit an illegal act to launder N4.6 billion transferred from the Office of the National Security (NSA). (NAN)