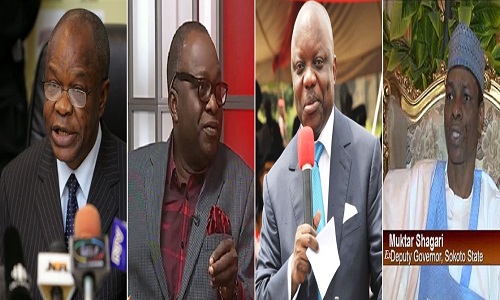 The National Human Rights Commission, NHRC, yesterday fulfilled its promise to unveil the names of electoral officials, politicians, security personnel and others indicted for electoral offences during the 2007 and 2011 general elections in the country.

The commission, which released the names under its “Electoral Accountability Project/End Electoral Impunity Project”, indicted 66 individuals and organisations allegedly involved in electoral offences between the period under review.

They were said to have been involved in either criminal offences or administrative, judicial and professional misconduct.

At the presentation of a 284-page report on the 2007 and 2011 elections in Abuja yesterday, the NHRC urged the Attorney-General of the Federation (AGF), Inspector-General of Police, INEC and other relevant institutions to ‘punish’ those indicted.

The report also recommended prosecution and disciplinary measures for them.

Also indicted for under administrative and judicial misconduct was the Federal High Court, Abuja, which was accused of highhandedness in its handling of the case between Barrister (Mrs. Amanda Peters Pam & another v. Nasiru Mohammed & INEC reported as (2008) 16 NWLR (pt 1112) 1 SC in a judgment by Justice Goerge Oguntade of the Supreme Court.

Resident Electoral Officers in states like Ekiti, Kwara, Delta, Anambra and officials of INEC, who conducted elections in the states in 2007 and 20011, were listed in the report but were not identified by names.

The NHRC’s Executive Secretary, Professor Bem Angwe, while presenting the report, explained that the exercise, which was undertaken on the strength of Section 5 of the NHRC Act 2010, involved an independent review of evidence of gross violations of the rights to participate in government, to effective public service and to fair trial in the country.

He said the project was intended “to bring to account persons indicted by the election petition tribunals and appellate judicial bodies for infracting electoral and related laws during Nigeria’s recent election cycles”.

Angwe said a committee established by the commission for the project was mandated to “review available election petition cases, extract any evidence of criminal or administrative indictments, recommend immediate and long-term measures towards curbing impunity in our electoral process”.

Earlier, Chairman of the Committee, Professor Nsongurua Udombana, argued that electoral malpractices persist in the nation’s electoral process because the Judiciary, INEC, and other agencies have failed to discharge their responsibilities satisfactorily.

He noted that where infraction of electoral laws were reported to the AGF and INEC, they hardly act, a development that continued to embolden politicians who see elections as “a do or die affair”.